Bangkok is an incredible monster of a city.  We spent ten days there at the beginning of 2016 and saw a tiny fraction of it.  A friend of ours was staying in an apartment block where the roof was accessible on the 45th floor, with panoramic views of the city.  It goes on and on and on.  High rises as far as you can see.  Shining lights, the constant buzz of traffic. 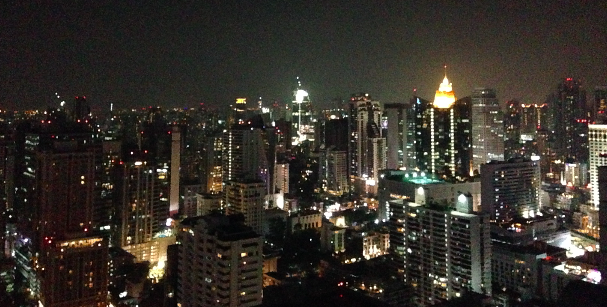 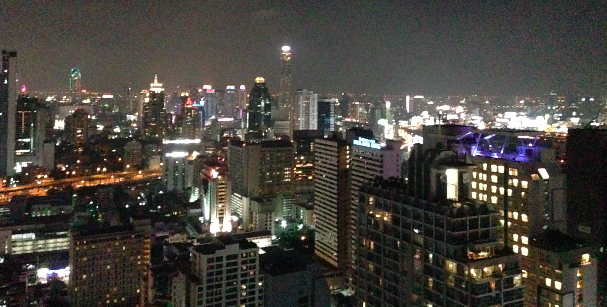 “In addition to a bustling tourism industry, Thailand’s capital city is home to 10 million residents within 1,500 square kilometres. Nearly half the population comes from other provinces and countries, seeking better opportunities, and many are considered poor and vulnerable. In 2011, Bangkok experienced a severe flood with estimated damages of $45 billion to global supply chain, out of which only $10 billion were insured. This sparked the development of a manual for flood management that includes lessons for resilience building. However, technical expertise and financial resources for creating and executing resilience strategies remain limited.

Sounds like a lot of cities.  Here is what I found, in my short stay there.

The smell of Bangkok is not for the faint of heart or nose.  On one particularly smelly day, we walked over a stormwater drainage line and it smelled like an open sewer.  There are a number of channels running through the city and they also smell.  I’m not sure if this is linked to the age of the infrastructure, but it seemed to me that the city was not adequately equipped to manage its wastewater or its stormwater.  There is water all around and through Bangkok.  It is not hard to imagine that flooding can happen quickly and that its impact could be quite severe.

As with a number of Asian cities, the electrical and communications infrastructure looks like a real challenge.  A bird’s nest or spider’s web of cables.

Thailand is not poor though.  There was a stark contrast between Bangkok and the cities in Vietnam and the Philippines that we had just been in.  We experienced one power outage while I was there, but that appeared to be from maintenance work on the local grid.  Not from capacity issues.

We stayed in Chit Lom.  It’s an easy, if a bit long, train journey from the airport into the city centre.  Our apartment was within easy walking distance to the train station, and the elevated walkways that link one shopping centre with another (shopping is not taken lightly in Bangkok…)  On one particularly touristy day, we took the train to the water’s edge, and then caught a boat to one of the temples.  That was my experience of Bangkok’s public transport.  Fast, regular, air-conditioned and predictable trains, and boats. 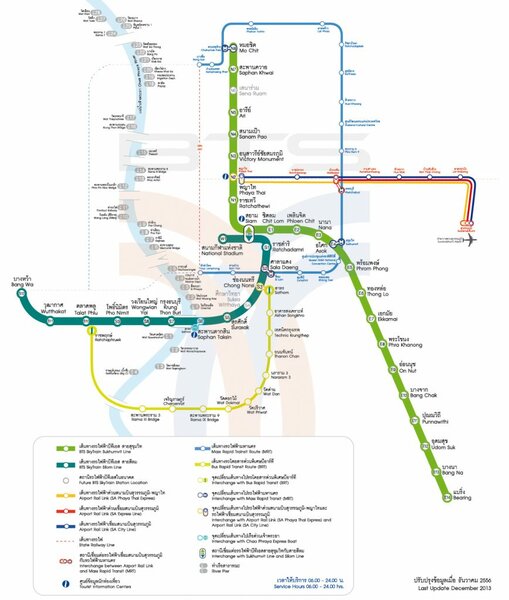 On one day we tried to take a taxi from Chit Lom to a neighbouring suburb, but the driver turned us away, and recommended taking the train as it would be faster.  On another day we took a taxi to their secondary airport, to go to Chang Mai, and we crawled through the traffic.  From this one taxi ride, and from our walking around the city, it’s clear that traffic is an issue.  I am not sure what the public transport system is like once you are out of the city centre.  There are a number of bus routes operating, some of which run all night but the city is enormous, with millions of people needing to move around every day, all day.

So when 100RC lists poor transportation as a challenge, I can understand why.  The train system is set up for people to move from the airport to major hubs easily.  It can’t possibly handle 10 million people. It’s monstrous infrastructure running through the city.  It can’t have been easy or cheap to build, and any expansion to it must be a gigantic undertaking.  The city is hot, and it’s not easy or comfortable to walk around.

The city is hot, and it’s not easy or comfortable to walk around.

Plastic is the tragedy of Asian cities (with Singapore the major exclusion – possibly Seoul too, but I’m yet to go there).  It’s everywhere and it’s heartbreaking.  No stretch of road, or expanse of water, is free from it. 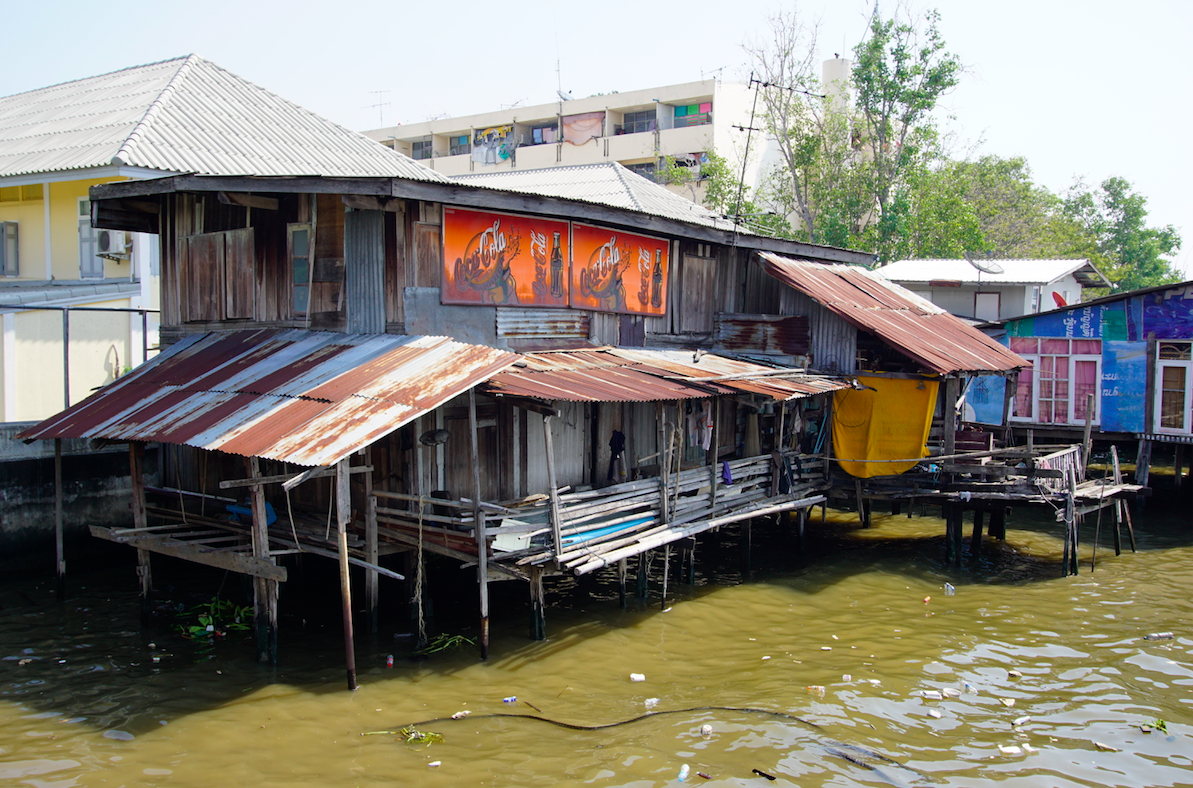 The air quality was also not great.  Our friends who live there have commented that at times they have to stay indoors because the air quality is too bad to be outside, particularly as they have a young child.

The SkyTrain is built above roadways, and this infrastructure naturally traps vehicle exhaust fumes.  I was four months pregnant while we were there and it made me feel quite conscious of what air I was breathing in.

This was not our first time in Bangkok.  We spent a day there in December 2013.  It was around the time of civil riots in the city, and we were quite conscious of this as we made our plans for the day.  In August 2015, the Erwaran Shrine, located within the city centre, and a short ten-minute walk from where we were staying in Chit Lom in 2016, was bombed.

Then in October 2016 the national monarch, King Bhumibol Adulyadej, died at the age of 88, after reigning for 70 years.  This has led to more concerns regarding civil unrest in the country.

For all of these threats and the knowledge in the back of our minds that the country, and therefore its capital, was experiencing this discontent, we never came face to face with it.  We were conscious while we were there that it’s recommended that tourists avoid talking about the king, the military junta or politics in general with local Thai people.  It’s difficult to get a sense of what local people are struggling with, or living with if you aren’t really able to talk to them about it openly.  That says a lot itself I suppose. 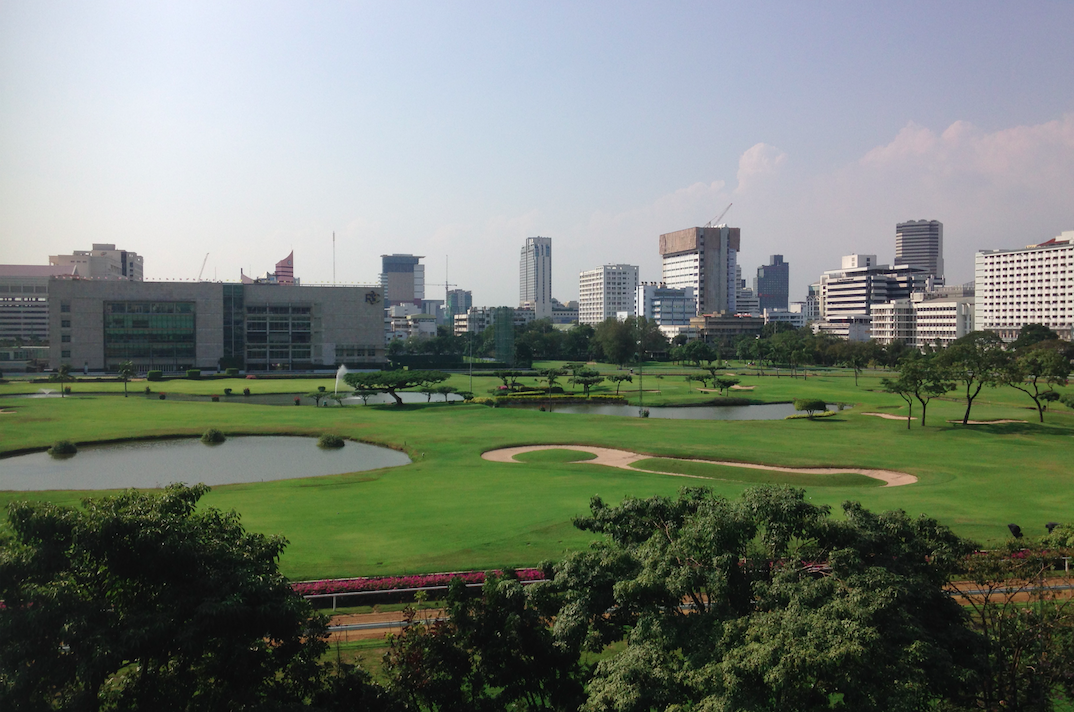 While we were in the Philippines I saw a sign which broke my heart a little bit.  It was in a public lavatory, and said something to the effect of ‘Our children are precious, please protect them’ and made reference to child trafficking.  I was reminded of that sign when walking around Bangkok.  Old white males sitting at tables being served by young, beautiful Thai women or men dressed as women.  Viagra (or a cheap knock-off) for sale by street vendors.  The sex industry seems to be alive and well in Bangkok.

It’s hard to see this and not feel that local Thai people are being exploited by wealthy westerners.  Surely this has an impact on a place’s resilience?  If your people are objectified and targeted by a certain demographic of tourist, it must have a knock-on effect.