The other day I read an article about how a Canadian utility was using balloons filled with compressed air to store energy.  Air in the balloons is pressurised when there is an abundance of electricity, and this air is released when there’s a shortage.  It’s similar and yet opposite to a pumped hydro system.  You can read about this here.  This got me thinking as you’d need balloons that can inflate and deflate and withstand various levels of pressure.  You’d need pipes that transmit the air to and from the balloons and you’d need pumps and turbines to fill the balloons and then harness the energy in compressed air.

What if the balloons stayed constantly buoyant but what changed was their level under water.  What this would mean was  that you’d need an anchor, a buoyant device, and something which could act as a winch and a dynamo.  Would this be easier? 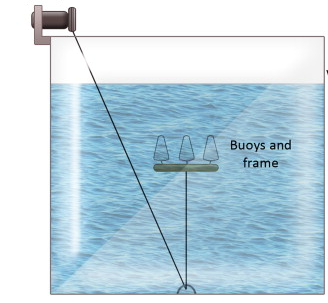 Clearly you’d need the equivalent of ‘head’ with pumped storage, so the depth of the water would be adequate to give the system a good amount of kinetic energy.  No point setting this up in one meter of water.  You’d also need to ensure that there’s nothing around the surface of the water that it would interact with; if you’re driving a boat with an outboard you wouldn’t want to go around popping people’s balloons.

The material used for the chain or rope would need to be able to withstand moving backwards and forwards, without deteriorating too quickly.

I’m naturally not the first to think about this.  Someone filed a patent in America.  Hopefully they’ve done something about it, because there’s nothing more useless than someone blocking technology development with a patent that they’re just sitting on.  Especially if it’s not rocket science.

Someone has also picked this up at the University of Sharjah, UAE, with a paper published in 2015 and that the efficiency of the system is just under 40% (not great, but also not terrible if it’s relatively cheap and can be scaled).  They say the compressed air system they tested (not under water) had a much higher efficiency of over 84%.

It’s an interesting concept, and I’d be keen to hear if there are any applications of it or if anyone’s seen any more studies on it.

As a last note, there are other buoyant technology that are being looked into, some of which are being researched by the University of Innsbruck.  Their research would make use of the empty space in offshore platform or wind turbine pillars/support structures.  In these applications water would be pumped in and out of the structures.  Interesting all around.