This city is incredible and alive.  There is this sense of organised chaos that permeates through the place and nowhere is this more evident than in the traffic.  The picture above is not a fair representation of what it’s like to walk around here.  Over 10m with only eight bikes in shot? Unheard of!

Walking through the city you realise how:

Now it’s not a new concept that cars take up a lot of space on the road.  There have been a number of images that have tried to demonstrate this, the most recent of which I’ve seen is below, from the International Sustainability Institute’s Community Toolkit.  What this image doesn’t show is how densely people can commute on bikes.  Especially when the boundary between the road and the pavement is ‘negotiable.’

I was in a taxi the other day (taking up way too much space but I cannot ride a bike, and even if I could, I’m not sure I’d be able to navigate all the unwritten rules of being on a bike here) and the taxi went down a street with two schools on it, at the school’s breakup time.  Thanks Mr Taxi Driver.  I’m not good at estimating numbers, but if I had to guess I’d say there were over 200 bikes in a 50m strip.  The pic below doesn’t really do it justice.  The road was a nightmare to navigate.  But there is NO CHANCE so many people would have been able to squeeze onto the road to pick their children up if they were all in cars.  I doubt whether so many people would have been able to fit into buses (without either double deckers, or being incredibly cramped). 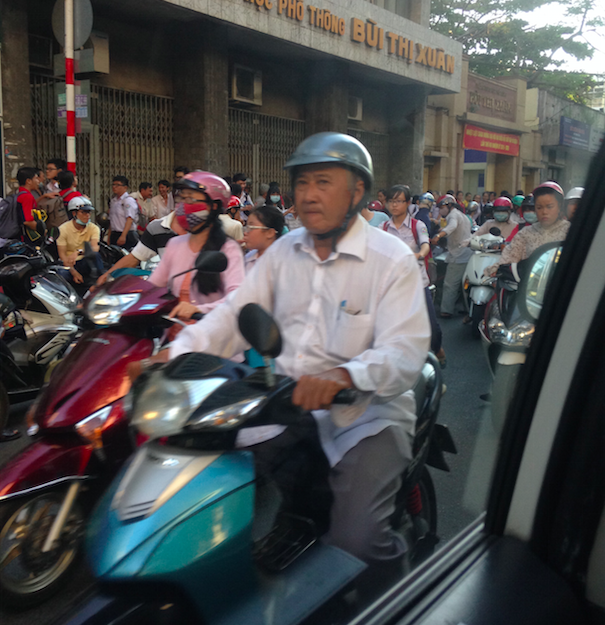 Parking is another thing.  The amount of space dedicated to parking in cities is close to criminal.  Constructing entire high rise buildings solely for the purpose of accommodating cars is laughable.  But when you have millions of bikes moving around a city, you still have to accommodate the bikes while people go about their business on foot.  Below is a parking space I encountered on a Sunday at the side of a park.  At about 12pm on a weekend there was a queue of about 20 bikes, just waiting for some space in this lot.  You also see bikes parked three deep on the pavement as you walk around.  Parked in?  No worries, just roll the bike that’s parked you in backwards, pop your bike out, and roll the other bike back into place. 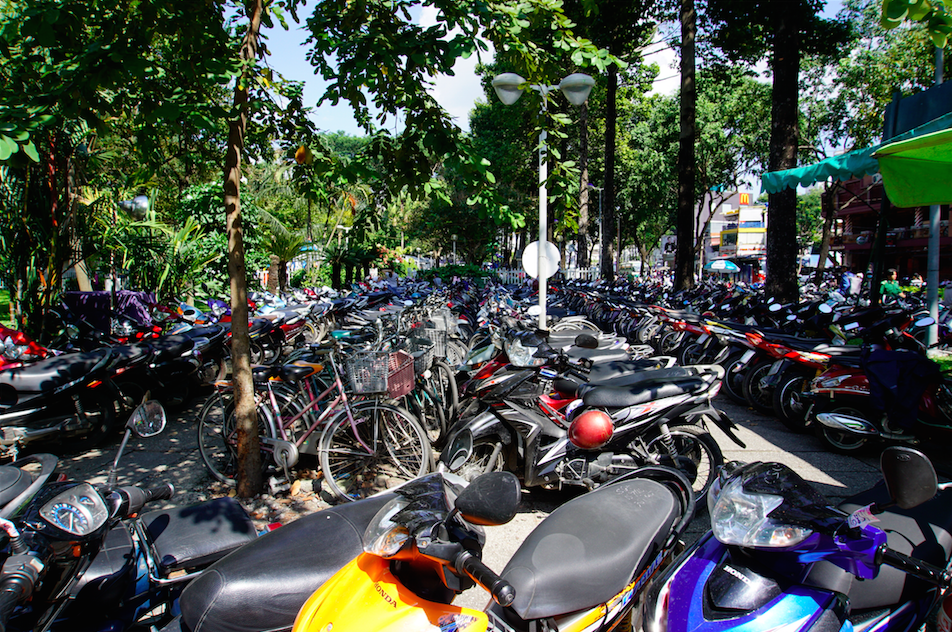 What these bikes don’t address, is the issue around air quality.  They’re all running on little petrol engines, putt putting fumes out.  Nearly everyone rides with a mask on.  Imagine how the air quality could be totally transformed if these bikes were transitioned over to electric.  I’ve seen a couple of electric bicycles around the place, but they’re more the exception than the rule.  There’s definitely a place for fully electric scooters here.

Lastly, the things people carry on these bikes is amazing.  It’s stuff that people transport in their cars, but that you’d never get to see.  Ice, fruit, furniture, crates…  I’ve seen an enormous drying rack.