a) Direct use of geothermal (heat) energy

Heat from the geothermal springs is used to provide heat as a service where needed.  This could be for heating buildings, drying food or for other applications that require heat.

This is fairly easy to understand, and is not dissimilar to applications of solar thermal energy.

The earth’s crust temperature remains fairly constant, regardless of atmospheric temperatures.  This means that on hot days the earth can be used to deposit unwanted heat and on cold days, it can be a source of heat.

The ground then becomes the sink or source of the heat exchanger in geothermal facilities.  Water (or other fluid) can be directed through a series of pipes underground.  There needs to be a difference in the temperatures between the fluid and the ground.  If the fluid is warmer (i.e. on a hot day), the ground will act as a sink.  If the temperature is cooler (i.e. on a cold day) the ground will act as a source, and heat will move from the ground to the fluid.  This fluid can then be integrated into, say, a building’s air conditioning system.

Flash (39%) and double flash (19%) accounted for nearly 60% of all installed geothermal electrical generation capacity in 2013, so I’ll cover this first.

This facility type uses pressurised hot water (>180ºC).  The water is delivered to a steam separation chamber.  Here, the high temp water is separated rapidly (‘flashed’) into steam and water.  The steam is used to power a turbine, and the water (called brine as it will be a solution of water and various minerals) is returned to a reservoir.  If it’s returned to the same geothermal source, it will heat up to repeat the cycle once more.

If this brine is still at a high enough temperature, the same process can take place again, effectively re-flashing the water, separating once more into steam (to power a turbine) and a more concentrated brine (to be returned to the reservoir).

Here’s a schematic showing the basic layout, from Energy Almanac, that I pinched: 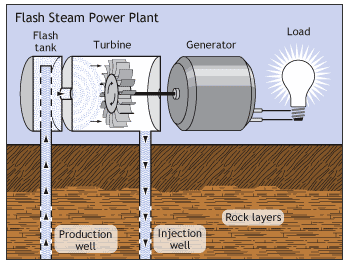 This one is the simplest to understand, and accounted for 25% of all geothermal electrical facilities in 2013.

Underground water is heated to such an extent that it exits the reservoir as steam, and this steam goes directly to the turbine to generate electricity.  ‘Spent’/condensed steam (aka water) is returned to the reservoir as with flash systems.

There would be heat recovery systems in place to increase the overall system facility. 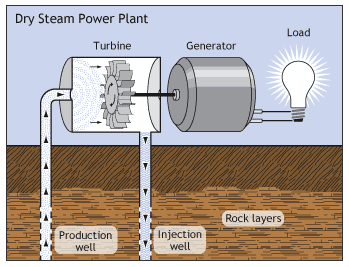 These systems, making up 14% of global installed capacity in 2013, are better at making use of water at a lower temperature.  They also keep the ground water in a closed system.

Moderate temperature water enters a heat exchanger, where energy is transferred to a substance with a lower evaporation temperature.  This substance vapour is then used to drive a turbine to generate electricity.  Two different types of fluid are used (i.e. binary systems).

It’s good to know that this system can be integrated with the flash and dry systems above, as the condensed water from the high temperature systems still has usable energy available, and, when integrated with a binary system, two different turbines can be powered in different loops.

In for a penny, in for a pound – another knicked pic: 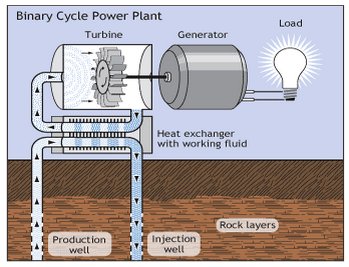 Once the water is heated and then delivered to the plant, the same technologies as listed above would apply.