Prior to arriving in the Philippines, I had been hearing about the increase in focus on renewables, as a distributed generation option.  Walking around Manila, you see clear evidence of this, with rooftop solar mounted around the city and various solar businesses dotted around the city.

I popped into a solar developer’s office, Del Sol Energy, and we chatted for a bit about an 80MW solar PV facility that they are developing in one of the southern islands.  They’ll be aiming to access the government’s renewable energy feed in tariffs.  The process for accessing the FIT’s is shown in the diagram below: 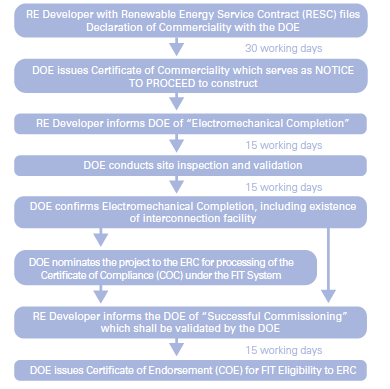 Under the National Renewable Energy Programme (NREP) the Department of Energy sets out a target that RE capacity will be over 15,000MW by 2030.  This is a significant increase in current capacity and nearly the entire current electricity grid.

The FIT has been developed as a means to achieve this target.  This guarantees the generator a fixed preferential rate for electricity generated, and is paid for through a FIT allowance payable by all electricity consumers, working out at P0.0406/kWh.  (1PHP = 0.21USD as at the 26th Sep 2015)

The initial feed in tariffs, with the recent proposed reduction in the rate, along with an extension on maximum capacity to be awarded is shown below.

As at the end of 2012, 5,600MW of renewable energy projects had been submitted to the DOE and subsequently approved with many more projects in the pipeline.  The DOE’s website seems to be down and it’s making it a bit tricky to find out some of the details on the projects that have been awarded, and official notices relating to the movements in the FIT.  Watch this space; any updates found will be posted.