The Philippines is a made up of a series of islands, with a population of over 92million.  This naturally makes the delivery of electricity more complicated, as the traditional system of centralised generation with extensive transmission and distribution is clearly not as easy as in other non-island countries.

The country is heavily dependent on imported fossil fuels.  In 2013 nearly 44% of all energy requirements were met through imported coal and oil [DoE].  In terms of the electricity supply, the overall installed capacity of the Philippines electrical system totals 17.9GW, most of which is in the northern region of Luzon, where Manila is located. 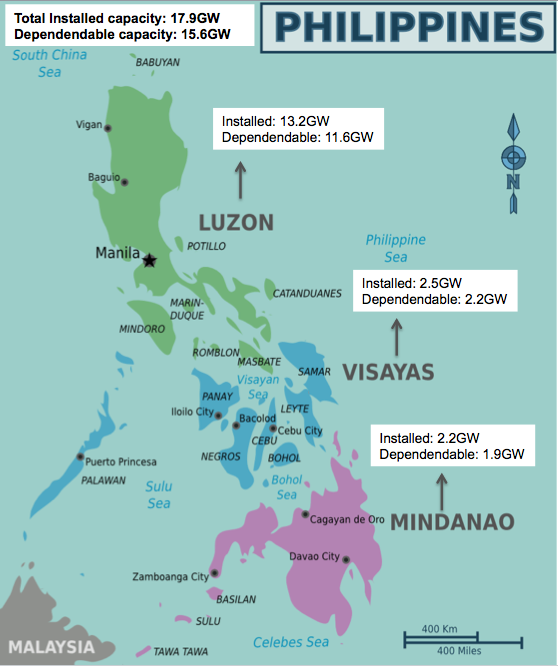 The Philippine energy plan expects the installed capacity to increase to around 25.8GW by 2030, while demand is expected to be over 29GW.  While there is over 90% of electrical coverage here, energy security is a concern, with the Department of Energy (DOE) warning of rolling brownouts (or load shedding to the South Africans amongst us) in the summer of 2015, with supply shortages of 450-500MW noted in the Luzon region.  Local residents have indicated the need for back up generators to protect themselves from capacity constraints, and some of the dive shops visited have stored compressed air to allow for diving even during brownouts.  There’s also a lot of solar installed in Manila and the more remote islands.

The graphs below show the energy generated by region and by fuel source in 2014 [Source: Dept of Energy Power Situation 2014]. 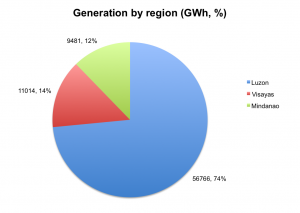 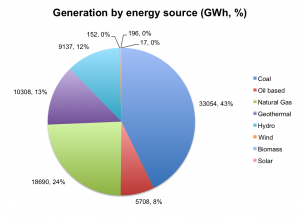 There is an increased focus on increasing generation competition in the market.  In 2006, the Wholesale Electricity Market was established.  From October 2011 to April 2012 approximately 9.2% of all the electricity consumed in the Luzon and Visayas regions was traded through the market.