The International Energy Agency (IEA) hosted a webinar on the 11th September, focusing on the findings of their Energy Technology Perspectives report for 2015.  One of the topics covered was around Carbon Capture and Storage (CCS).  This topic had come up in the IGB Conference held in Singapore recently, and it seems to be more topical as Paris’ COP21 approaches.

CCS is the separation of CO2 from power generation or industrial processes.   This CO2 is then transported and permanently stored, possibly underground, or as part of a new chemical or substance.  The aim is to remove the CO2 from the atmosphere, or avoid allowing the CO2 to reach the atmosphere in the first place. 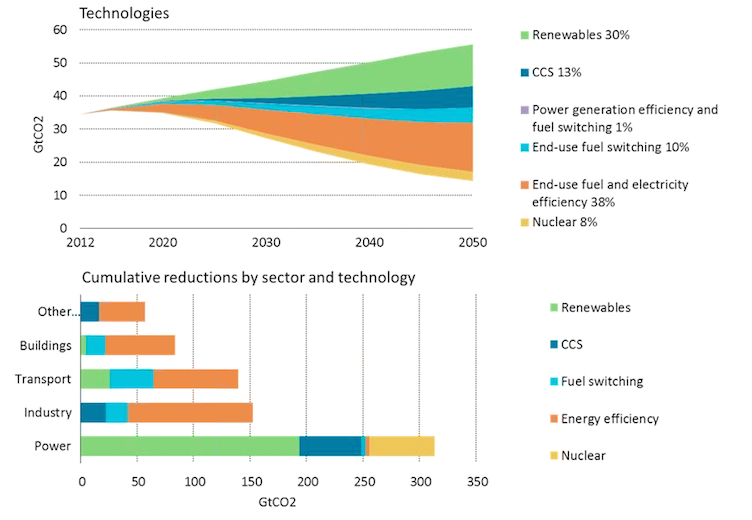 In their scenario where global warming is kept beneath a 2 degree increase threshold, the IEA’s model has CCS contributing 1/6 of CO2 emission reductions in 2050, and totalling 14% of cumulative reductions between 2015 and 2050.  Its role is therefore not insignificant.  The IEA has found that the inclusion of CCS is economically justifiable, given that the 2deg scenario would be approximately 40% more expensive to achieve if CCS is not included.

But with such a key role to play in mitigating climate change, the progress on projects, amounts spent, incorporation of CCS into industrial sectors has not been as advanced as expected by the IEA in their 2013 Roadmap.

In this they laid out seven actions in order to achieve the widespread application of CCS technologies.  These are below.  The IEA indicate that these are critical, particularly as many of their targets are aimed at 2020.

Over the next week, Energy Ramblings will be looking into some of the technologies that exist, some of the projects that have been built, the progress made against targets, and some of the challenges that are being experienced along the way.