Islands interest me.  As a mostly closed system, Singapore has clear entry and exit points.  It’s a country in a city and a city in a country.  They have country wide considerations in a city wide area, with clear land constraints, and no real luxury for NIMBY behaviour without exports or imports.  I took a bus from Singapore to Malaysia’s Johor Bahru yesterday, and as we were crossing the bridge, we watched massive trucks bringing goods (including grass turf) in.  So what happens to it all?  Singapore is growing upwards, but there’s only so much that can be imported.

There are recycling programmes in place, at industrial, commercial and residential levels.  They focus particularly on minimising construction waste generated.  Recyclables are collected from households every two weeks (supposedly) however I never saw this in practice where I was staying, and didn’t notice any obvious recycling only bins when I was walking around.  This doesn’t mean they’re not there though and I’ve read that there are 6,000 bins scattered around the city.

Most of the waste not recycled goes to one of four operating waste to energy incinerators.  These make up around 2% of total electricity capacity in Singapore (where most electricity is generated by using natural gas imports.)  While this reduces the overall quantity of waste, it doesn’t remove it entirely, and incinerated waste ash and non-recyclable, non-combustible waste still needs to go to landfill.

For this, Singapore has constructed the first offshore landfill, and is Singapore’s only landfill – Semakau Landfill.  It looks like a Dubai-like structure. A 7km rock bund wall was built off an island, and is lined with an impermeable layer.  Waste is brought, via barges, from the Tuas transfer station.  Commissioned in 1999, there’s 350Ha of landfill area, and it can take 63million m3.  Enough to reportedly take Singapore to 2045. 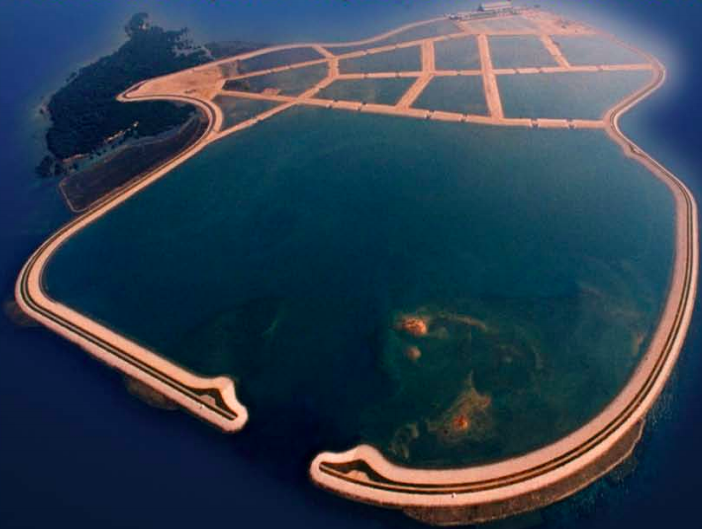 They’ve designed it to be as eco-friendly as possible, and they offer tours.  You can read more about this here.

There are aspirations for a zero waste target.  What this does highlight for me is that so much waste is being generated, and dealt with, by a country with high sustainability aspirations, and clear land constraints.  The scale of waste management issues in other, less advanced or ambitious countries must be a shocking thing to behold.