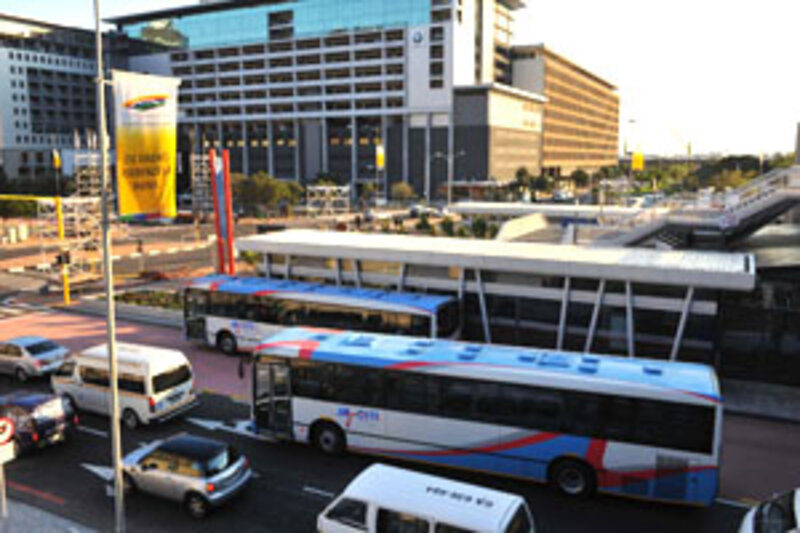 I was driving behind a GP licence plate watching him driving in the red bus lane on the way out to Milnerton (not directly behind, mind you, or I would have been a moron of equal measure).  I had to disentangle my jaw from the pedals.  ‘Who cares about your (desperately needed) public transport system when I have a Merc and I can save myself a whole 2 minutes by being an idiot?’  REPORT THEM, REPORT THEM ALL I SAY!  All I managed to do was wave a few fingers at him as I passed him (yes, I passed him).  I think it was shock.

The City’s Traffic Services Department has issued a number of traffic fines – each amounting to R300 – to motorists who have been caught driving in the dedicated MyCiTi bus lanes. On January 25 alone, the Ghost Squad trapped 104 motorists for driving in the bus lane next to Stadium Station. Of these 104 vehicles illegally making use of the red lane, only two were minibus-taxis, and the rest were privately owned vehicles.

As part of the MyCiTi Public Transport Service, a number of dedicated bus lanes have been constructed around Cape Town. This includes lanes on either side of the Thibault Square and Stadium Stations, around the traffic circles in Adderley Street, next to the Civic Centre station, and out through Paarden Eiland and on the R27. These lanes are red in colour, and have the word ‘BUS’ painted on them. The lanes allow buses to travel rapidly between destinations.

Other special traffic measures were also introduced to facilitate the safe and rapid movement of MyCiTi buses. This includes ‘pre-signal’ traffic lights, located approximately 50m ahead of normal traffic intersections, mostly seen on the R27, and ‘no turning’ signs to prevent motorists from crossing a dedicated bus lane, such as close to Thibault Station on Hans Strijdom Avenue. Ignoring these traffic measures is also an offence, and liable for a fine.