Originally posted in October 2019 on LinkedIn by Winodh Jayewardene. Winodh is the Technical Executive – Network Connections and Performance at WSP Australia and contributor for Energy Ramblings.  Re-posted with permission.

It is interesting talking to people in the industry to get their view on the grid connection process and how it compares to say a couple of years ago. My initial thinking before talking to others was that there weren’t any more surprises and overall a much smoother process could be expected, however this does not seem to be the case (this article was started before the recent events in North West Victoria / South West NSW).

The industry has learnt a lot over the last three to four years but it seems that the grid connection process experience is far from smooth and each project has its particular set of challenges.

As an industry it is important to also acknowledge how far we have come and that we are viewed internationally as world leading (this was echoed in my observations during the CIGRE Paris session last year where we seem to have the answers to a lot of the problems others were facing).

Coming back to the challenges, it seems that this time around we are mostly aware of what the issues are, however the process to work through to overcome these issues seems to differ from project to project as well as across NEM regions.

Some initial thoughts on what causes these pains during the grid connection process are noted below.

Consistency of process and requirements

One of the biggest challenges is that of understanding the requirements as they apply within different NEM regions. These specific requirements are often unwritten and it is the reliance on experience that helps to smooth out the bumps along the way.

Some of the challenges that projects face include:

Experience provides a bit of forewarning about what to expect and how to plan for it, but what if you are new to the market and don’t have the benefit of experience? One way to address this would be to have the expectations set at the start (if you know the right questions to ask), the other way is for consistency through standardisation.

By standardising the process, it forces this process to be documented, and by documenting the process, it ensures expectations are clear. With clear expectations, all parties have a frame of reference and know what the other party wants. After all, how can you successfully negotiate an outcome if you do not know what the other party wants? Some say it is not possible to standardise on requirements, but I don’t believe we have a choice. If we even get half of the inverters on the CEC accredited inverter list connected to the NEM, we will need to standardise on their performance.

Model and design information – How ‘correct’ should it be?

Hence performance of the generating system is essentially dictated by the switching controls of the converters and the performance can be ‘whatever you want it to be’ (within some reason of course such as current limits of power electronics and DC bus voltage considerations). How the PE connected generator performs is then essentially determined by the control code that is in the converter, hence the importance of ensuring the models are an accurate reflection of the actual code in the converter. Given the high switching frequency of these converters (and the fact that they are asynchronous devices) means the type of instability that could occur is at shorter time-step than what we are used to with synchronous machines (one of the reasons to move to EMT modelling tools such as PSCAD). 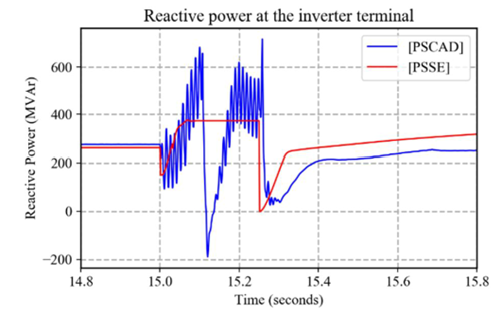 Take for example the figure above which shows the comparison between an RMS assessment tool (PSS/E) and an EMT tool (PSCAD). The higher frequency oscillations are due to fast acting converter controls which would not be evident in an RMS tool (RMS tools were never designed to assess such phenomenon).

The National Electricity Market (NEM) is one of the largest interconnected power systems in the world (constituting over 40,000 km of transmission lines/cables and 200 terawatt hours of electricity delivered to ~9 million customers). It could be argued that connecting a ‘small’ generator to a large power system may not have a material impact on either generator or network, hence some small inaccuracies in information may not have a significant impact on the outcome of any technical studies or the network in general. However ‘larger’ generator connections can present their own challenges. What is ‘small’ vs ‘large’ depends not just on the MW size of the generator, but also the network it is connecting into and there is not a simple formula you can apply to quantify ‘small’ versus ‘large’.

That said, to assess the impact of one generator (in particular a ‘large’ generator) connecting to the network, requires a lot of information about not just only the network, but also how the network is operated. Without this information, it is not possible to fully assess the impact of a generator connection (both in terms of impact of the network as well as determining the Generator Technical Performance Standards (GTPS) for the generator). With over 50 GW of new generation proposed to connect to the NEM, often connecting to parts of the network that were never design to accommodate generation, obtaining information required to undertake GTPS studies in a timely manner is often a challenge (both for the generator as well as the NSP).

However this information is crucial for both the generator and the NSP and the latter does have obligations under the NER to provide such information to proponents. Some of the information that is often difficult to obtain includes:

In some cases this information is not available to be provided by the NSP and the only options are to either wait until such time that this information is available, or develop this information yourself (the connecting party in the case of a new generator). This is likely the reason some projects make assumptions on inputs to keep things moving (careful what you assume!). Eventually the risk that a lack of or incorrect information this presents will catch up to the project, hence requires careful management (this is where experience and sound engineering judgement comes into play to understand the extent of missing information and the risk it presents).

We have an unprecedented amount of new generation connecting and a fundamental transformation of our power system. We don’t know exactly what the generation mix will look like, however one thing is for certain, and that is that there will be a major impact on how we plan, operate and maintain the power system as a whole.

This presents some challenges such as:

Grid connection risk is a big topic at the moment, probably because this presents the single largest risk which could delay first generation. Who takes on this responsibility depends on the contracting method but under EPC wrap arrangements, this has traditionally been taken on by the EPC contractor. Like any risk, not fully understanding the nature of the risk and its consequences can result in some pretty dire consequences (as was the case for RCR). However we are seeing a re-allocation of grid risk and this shifting from the EPC back to the owner in the context of fully wrapped EPC contracts. Under multi-contract or supply only contracts it is a different story of course and hence further care required as to roles and responsibilities around grid connection risk.

A typical fully wrapped EPC contract may look like this: 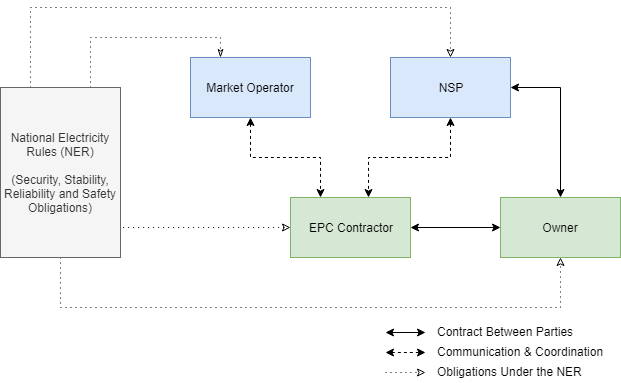 If you have not already picked it, the NSP/Operator and EPC interface is a crucial aspect in order to get projects connected, however there are no contractual obligations between the NSP/Operator and the EPC (these are typically discharged from the Owner (via a project and/or connection agreement to the EPC). The consequence of delays would then sit with either the EPC or owner but not with the NSP/Operator (noting that the NSP/Operator and project both have obligations under the NER to ensure a secure, stable, reliable and safe power system). This is probably another topic on its own, however system security and stability take precedence above all else and there is a relatively large imbalance of ‘power’ between NSPs and proponents which can further complicate the grid connection process.

Addressing this challenge and is extremely important in order to ensure we have sufficient supply coming online to meet demand and do so in the most efficient way such that we have a reliable, secure and stable power system.