The Department of Energy releases a summary of awarded projects every two months on their site.  I’ve taken some of this data to make the graphs below.

The four different categories that I’ve pulled out are only for grid connected projects.  There are some projects that have been awarded or that are pending for own-use, but I’ve left these out for the minute.  My reading of the reports that go along with the summary tables are that projects that have been ‘awarded’ still need to demonstrate compliance with various obligations.  Those that are listed as ‘awarded’ and ‘potential’ are not fully compliant with these obligations.  Obligations relate to the work programme, posting of performance bonds and something called “RESHERR,” which I can’t find an explanation for, but am guessing it relates to Health & Safety and Environmental obligations.  This is a total shot-in-the-dark guess.

Projects that have not been ‘awarded’ and are listed as ‘pending’ are still to have their status finalised under the Renewable Energy Law.  It seems that some of these projects awaiting this have been constructed. 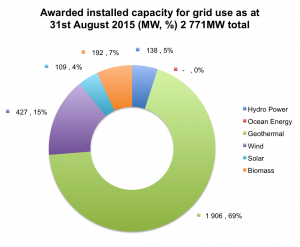 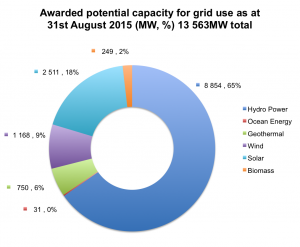 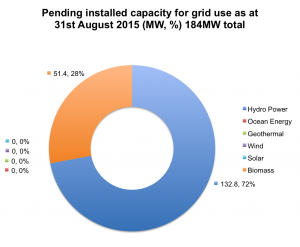 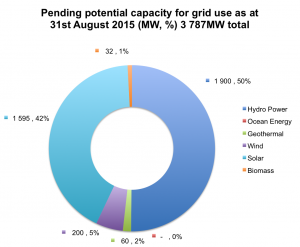 What also interests me is how this looks compared to the same time the previous year.  What jumps out at me from the below is that they seem to have some difficulty converting potential projects to installed projects, even when awarded.  The greatest movement seems to be in hydropower and solar, with wind and biomass projects moving in the wrong direction; possibly from a failure to comply with the above-mentioned obligations.