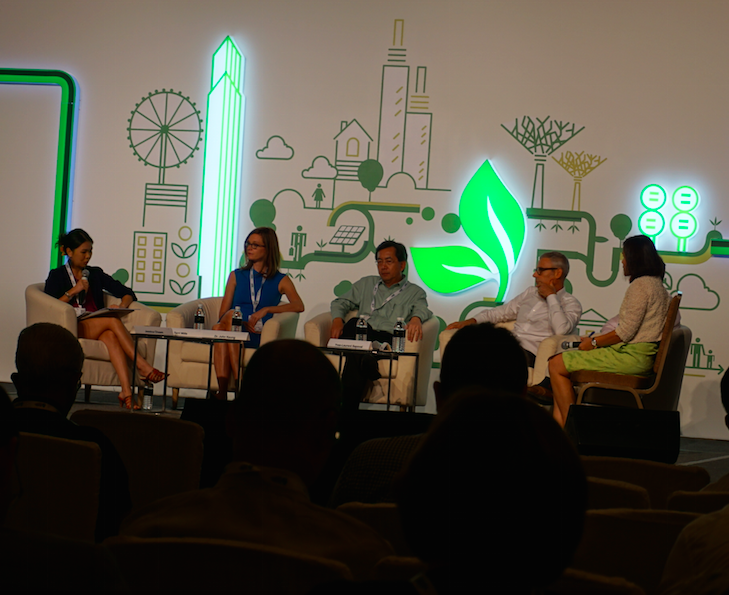 This week I attended the International Green Building Conference in Singapore. I’d attended sessions at the South African version before, and in my previous role at Arup I had been exposed to the ins and outs of the Green Star rating system used in South Africa. Much of the focus that I have seen has been on the material selection, building design to minimise resource consumption (energy, water, waste), the inclusion of the community in the facility, non-motorised transport access, and greening of the facility, through rooftop gardens, or general landscaping. Facades and their role in letting sunlight in and in minimising cooling loads on the HVAC system have also come through clearly.

What came up in this week’s conference, over and over again, is an increased focus on the impact of green interventions on the occupants of the buildings. Many of the speakers referenced studies which had looked into the impact that indoor air quality has on the performance of those working within the building, and, while there are not as many studies having been completed, further research is being done on the impact of other environmental conditions, including lighting, noise, and access to greenery.

Terri Wills, CEO of the World Green Building Council, raised this in her presentation, opening the conference, and she showed some statistics coming out of research being conducted as part of the betterplacesforpeople.org.

Here are some that were mentioned, or that I’ve found in the WGBC reports, where they’ve researched the difference in employee performance between green rated buildings (LEED or similar) and non-rated buildings:

Where there is better lighting:

Where occupants have an outside view

There are also impacts on absenteeism and staff turnover.

There were a number of stats and figures that were quoted during the conference, given that this seems to be an increasing focus of the green building sector. For instance, Jorge Chapa from the GBC of Australia indicated that green buildings in Australia have, on average, 2.88 less sick days than non-green buildings, and green hospitals have a 15% faster recovery rate.

The consensus was that improvements in the overall ‘green-ness’ of the building had additional benefits relating to performance, and staff health and retention. What also came out clearly though was that the stats are not based on adequate research, and there are not adequate metrics to measure productivity, particularly due to the subjectivity of what productivity actually is.

John Mandyck, from United Technologies, spoke on a research project being undertaken jointly with Harvard University, which aimed to quantify the impact of air quality on cognitive function, health and productivity. The report has not yet been published, and this should be out shortly, but he did mention that the correlation between ventilation and productivity was ‘strong and surprising’ and he expects that the results will change everything about how we view green buildings, and their associated value to building owners and occupants. Watch this space.

Alex Herceg from Lux Research, spoke about companies attempting to quantify human gains, one of which is Building Robotics (http://www.buildingrobotics.com/). They have developed an app called Comfy, which allows occupants to comment and control the localised temperature in their working environment. It connects to the HVAC system, and, using your location, can adjust the temperature, if requested. It also learns from previous requests and so can preempt the temperature requirements beforehand.

Perhaps less positive, but interesting nevertheless, is that I spoke to someone in the tea break who was of the opinion that the whole discussion was ‘propaganda’ by the green building sector, who clearly needed to be able to sell the concept further. You need the cynics, as you need the research. One should help to combat the other. Let’s hope it continues to be in the favour of green buildings.