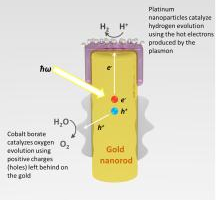 It would be interesting to see how long a field full of gold and platinum would last in SA.  Or anywhere for that matter…

Scientists from UC Santa Barbara’s (USCB) have reinvented solar power with a new approach that captures energy using a “forest” of gold nanorods and some chemistry.

The researchers tested the technology with an experimental solar conversion device that ran for several weeks, and published their findings in the February edition of the journal Nature Nanotechnology. The materials used for the design also promise much more durable solar devices than today’s solar panels, a press release said.

Conventional solar panels collect energy by having one side of a semiconductor material facing the sun to create an electrical current. The Santa Barbara team’s “nano forest” sits submerged within an array of specialized materials to absorb light. Here’s how the entire array makes electricity (if you like the science of it).

The forest’s nanorods produce electrons when exposed to light, and some electrons pass on to a layer of crystalized titanium dioxide to be captured by platinum particles, the university explained. That process, combined with water and a catalyst, creates hydrogen and charged oxygen that can be used to power things or make useful chemical reactions.

Another major difference between this new technology and today’s commercial solar panels is that semiconductors, such as silicon, experience photocorrosion due to long term exposure to UV light. That corrosion triggers a gradual break down of the solar cell over time, but that’s not the case with gold nanorods.